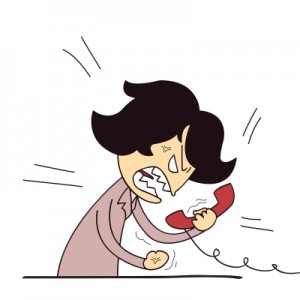 In the last week or so, there’s been plenty of discussion online about a website called shipyourenemiesglitter.com. When stories about it went viral, the popularity of the site blew up, to the point where it stopped taking new orders and the owner, who noted he was “sick of it” decided to put it up for sale.

Currently, the bid to buy the site is over $70,000. So there are entrepreneurs out there who believe there will plenty of people in the market to “send glitter to people they hate.”

They’re probably right. Modern life has plenty of frustrations, and many of us have limited ways of venting. Sending glitter to an enemy is a pretty mild way of retaliating for a transgression, and it might even be a lighthearted way to help clear the air between people with differences.

However, adult anger—or more accurately, the aggression that stems from anger—can be a significant problem for many people. Properly understanding anger—and how to cope with and manage it—are critical health skills.

What Anger Does To The Body

Anger can cause a number of hormonal and neurochemical changes, which increase cardiovascular response, boosting blood flow and strength. But this additional stress, if it persists, can affect a number of the body’s systems, increasing risks of hypertension and stroke, gastric ulcer, bowel diseases, and heart disease. Anger that isn’t resolved or address may even increase the risk of certain cancers. Being prone to anger can also be hereditary, and research shows that it might be by music or video games.

What Happens When Anger Gets Out Of Hand

Anger is usually expressed verbally or through gestures directed at objects rather than other people. About 25% of the time, anger may be accompanied by vindictive thoughts, but these may never be followed up. However, about 10% of the time, anger can manifest itself with aggressive acts toward other individuals. The aggression may be mild (verbal or a harmless gesture, like mailing glitter), or strong (physical or self-destructive acts like telling off your boss). When the response becomes too strong or inappropriate, anger may be a problem that should be addressed.

When Anger Is An Appropriate Response

Anger often serves positive functions. It can be a signal that tells others that they should listen and try to resolve a conflict, or it may signal that we should change our actions to help resolve someone else’s anger. Anger can be a motivator to stop injustice; in fact, many major social movements have their roots in anger or dissatisfaction because of unfair treatment. Anger can be an emotional outlet, even in indirect situations. If we get angry at a character in a movie or TV show, we may find that we feel better afterward because of the tension release.

When To Seek Help For Anger Issues

Everyone experiences anger. It may be over something minor, like a person cutting in line, or over a major life event. Properly managing anger requires the ability to determine just how significant the situation is, and whether or not a response is appropriate.

When anger persists, affects key relationships, or creates situations where you feel as if you’re carrying a grudge, or feel as if you want to physically harm someone, then it may be wise to seek help.

If anger is having a negative impact on your life, consider talking about it with a professional. You may be surprised at what you can do to let go of things that make you angry—and feel better both physically and mentally.

You may also find that you can look at glitter and not feel the urge to mail it to someone.

Image courtesy of jesadaphorn at FreeDigitalPhotos.net